Kohen , Patrick Dumberry. Marcelo Kohen and Patrick Dumberry explore in an article-by-article commentary the Resolution adopted in by the Institute of International Law, on state succession in matters of state responsibility. They analyse the content and scope of application of each provision based on a comprehensive survey of existing state practice and judicial decisions both domestic and international , as well as taking into account the works of scholars and that of the ILC Special Rapporteur in his proposed Draft Articles on the same topic.

Yet, I found many investment cases where the issue arose, but had been barely noticed let alone discussed by arbitral tribunals. The only exception was the Sanum Investments Ltd. Laos award, a case that only dealt with a very specific question succession to a BIT in the context of a transfer of territory in rather unique circumstances the special status of Macao within China. I also started investigating the work of the ILC on the question of succession to treaties and, I must admit, the results were very disappointing and, frankly, slightly disturbing.

As further explained in this book, the conclusion reached by the ILC in the Vienna Convention that a new State in the context of secession and dissolution automatically succeeds to bilateral treaties which were signed by the predecessor State is illogical considering the particular nature of these instruments. Moreover, the outcome is contrary to all the work that had been conducted on the matter by the Commission itself for many years.

This discovery confirmed my earlier impression that this was, after all, a topic worthy of further investigation. After writing two articles on the question in , 6 I worked as counsel to Kazakhstan in the WWM v. Kazakhstan case which as further discussed in this book involved State succession issues.

This was surprising given the fact that the problem was not uncommon and had often occurred in the past.

Using both classic material 9 and new research tools, 10 I reassessed old examples of State practice and case law which had been discussed by scholars in the past in other contexts to determine whether they could be relevant to the issue of succession to contracts. I found a number of old and new examples which were indeed very pertinent to my analysis.

I also examined all existing and publically-available arbitration cases involving succession to BITs. I found 46 publicly-known investor-State arbitration cases dealing with the issue. This book offers the first comprehensive analysis of State succession issues arising in the context of international investment law.

Specifically, this book examines two fundamental questions:. The book answers the question for each type of State succession.


The answer is in part based on the work of the ILC on succession to treaties and the very limited scholarly analysis which has been conducted in the past by authors. The analysis is for the most part based on my own investigation of State practice and the review of judicial decisions from international and domestic courts.

Based on my previous work on other issues of State succession, I developed a novel comprehensive framework of analysis which takes into account a number of factors and circumstances. The solution I have put forward in this book for each type of succession is ultimately the one which I believe to be the most logical and appropriate given the specific circumstances of each situation. The questions that were at the heart of my reflection throughout this book were the following: What should be the logical solution to this specific problem?

International Courts and Tribunals Series?. It identifies the core issues in the? The paper argues that professionalisation is both feasible and desirable to protect procedural integrity and thereby promote the external legitimacy of international adjudication amongst the public. This can be accomplished through a drafting process sensitive to national differences and prioritising standards that pragmatically solve recurrent practical problems. The paper ties into the overall theme of?

International Law as a Profession?. In particular, it directly links to the sub-theme of? The central argument of the paper that the articulation of common ethical standards for counsel appearing before international courts and tribunals is desirable and feasible in order to protect and promote the integrity and fairness of the international judicial process woul. The judgment of the European Court of Justice concerning the Kadi case has raised substantive and procedural issues that have caught the attention of scholars from many disciplines including EU law, constitutional law, international law and jurisprudence.

This book offers a comprehensive view of the Kadi case, and explores specific issues that are anticipated to resonate beyond the immediate case from which they derive. Protocol No 9 in the Treaty of Lisbon opens the way for accession. This represents a major change in the relationship between two organisations that have co-operated closely in the past, though the ECHR has hitherto exercised only an indirect constitutional control over the EU legal order through scrutiny of EU Member States.

The accession of the EU to the ECHR is expected to put an end to the informal dialogue, and allegedly also competition between the two regimes in Europe and to establish formal both normative and institutional hierarchies. In this new era, some old problems will be solved and new ones will appear.

Questions of autonomy and independence, of attribution and allocation of responsibility, of co-operation, and legal pluralism will all arise, with consequences for the protection of human rights in Europe. This book seeks to understand how relations between the two organisations are likely to evolve after accession, and whether this new model will bring more coherence in European human rights protection. The book analyses from several different, yet interconnected, points of view and relevant practice the draft Accession Agreement, shedding light on future developments in the ECHR and beyond.

Contributions in the book span classic public international law, EU law and the law of the ECHR, and are written by a mix of legal and non-legal experts from academia and practice. Focusing upon the perennial issue of the temporal scope of the right of self-defence in international law, this article examines the lawfulness of a military strike upon nuclear facilities as an invocation of the controversial doctrine of? It analyses this question with principal reference to customary international law as a supplementary gloss upon Article 51 of the UN Charter through detailed scrutiny of the applicable precedents, particularly the Cuban Missile Crisis of and the Osiris use of force in In arguing that the proposed strike would be an illegal use of force, the article provides a current assessment on the state of the law of self-defence.

It concludes that even if Article 51 of the UN Charter allows for either anticipatory or pre-emptive scope, international custom precludes their invocation to justify uses of force against nuclear facilities. There is no? The lack of common ethical standards for representatives before international courts and tribunals has been becoming increasingly topical, particularly in the field of investment arbitration. 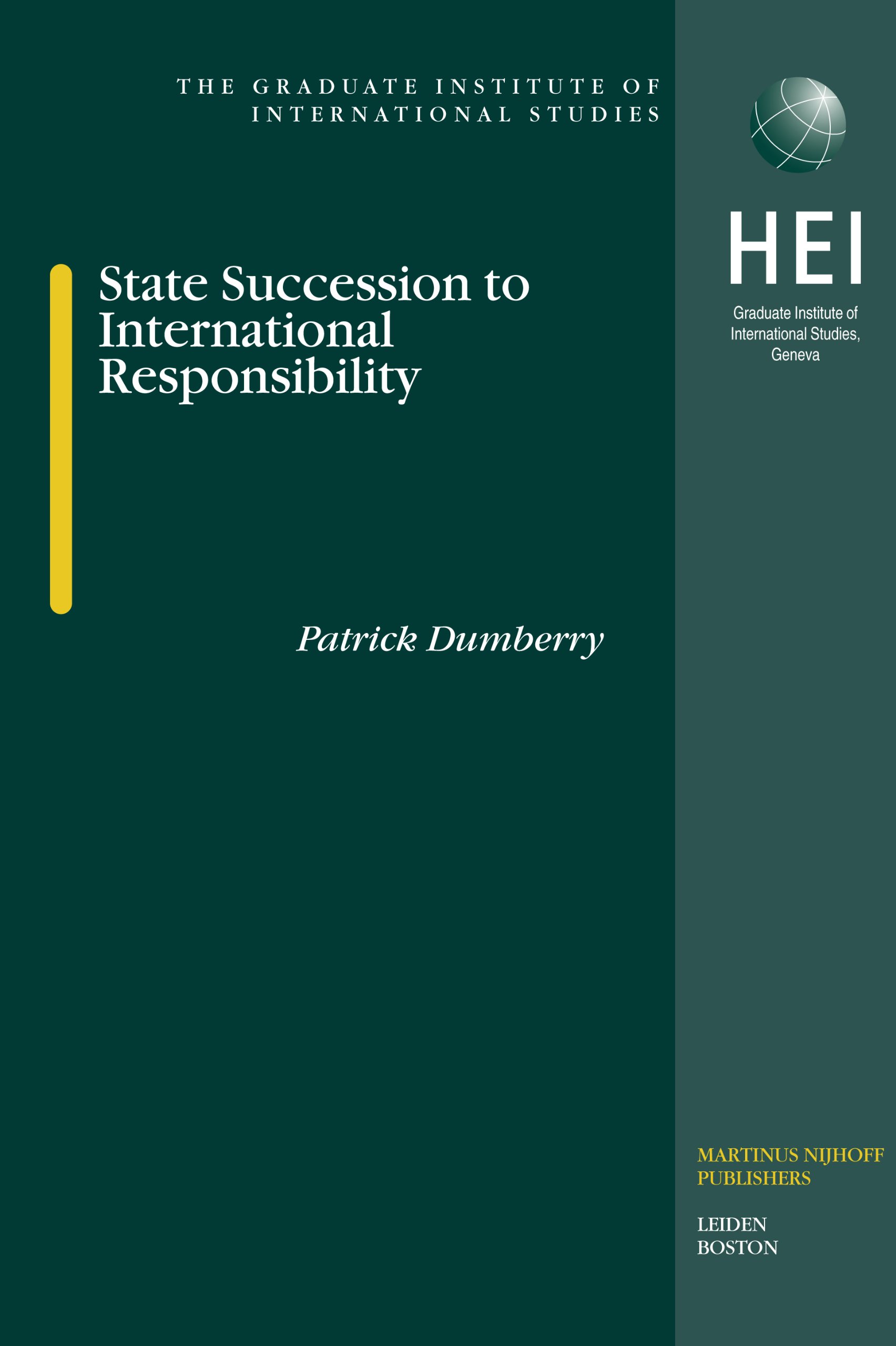 Initiatives by such professional organizations as the International Law Association and the International Bar Association to identify universal ethical principles suggest that there is a body of opinion amongst practitioners who believe that common ethical standards are necessary. This article examines the historical evolution of the representation before the Courts and the procedural and ethical problems concerning representatives that have arisen in practice.

It concludes that, far from being a topic of only theoretical interest, there have been considerable problems in practice arising from questionable professional conduct by representatives and conflicting national standards. It suggests that the absence of a prescribed code of conduct setting out the Court? It proposes that the Council of Bars and Law Societies of Europe take the lead in drafting a code of conduct for the European Courts, in consultation with their judiciaries, which could subsequently be adopted by the Courts and integrated into national codes of conduct.

The chapters in this volume have sought to provide a better understanding of procedural fairness within the international system. Our aims have been restrained given that the research agenda here is new: we have not sought to offer a? The aim of this concluding chapter is to provide a logical categorisation of these sub-principles, provide a possible framework given the findings that have been presented, and advance the key questions future research will have to grapple with given the current state of the research agenda. Of particular interest for future research are the problems for procedural reform of international courts and tribunals given the realities of cross-fertilisation, effectiveness and the utility of ad hoc reform versus grand revisions.

Sarvarian A Humanitarian Intervention after Syria,. There have been a string of decisions in recent years by the European Court of Human Rights concerning the peacekeeping operations and sanctions regimes pursuant to a mandate of the United Nations Security Counci lin which Member States of the Council of Europe take part.

These include the cases of Bankovic v. Belgium, Bosphorus v. Ireland, Behrami v. France and al-Jedda v. Council of the European Union.

The putative accession of the European Union to the European Convention on Human Rights potentially amplifies the importance of these issues.